An individual search for the depths of the mysteries of playing classical guitar as well as other types of musical styles.

Participants develop relationships through the use of simple instruments that belong to various musical traditions (Orff Orchestra). According to their abilities and their musical knowledge they experience the joy and beauty of creative expression within the orchestra. This stress-free kind of associative music making tends to become rather noisy sometimes. But with the attentive work put in by each member, under the guidance of an experienced mentor, the music becomes audible.

As a mentor and conductor, Etbin occasionally works in music workshops designed for education and relaxation in kindergartens, primary and secondary schools, societies, art and culture associations, health and therapy institutions, homes for the elderly, educational holiday camps, etc. 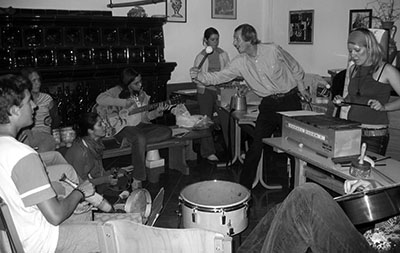 Etbin’s idea of creativity in art enables him to surpass the framework of cultural work. With his music teacher’s ear he reaches a greater psyho-social sphere of more or less underprivileged people, mostly children.

As a music activist of the Exiles Project, under the patronage of Ljubljana’s KUD FRANCE PRESEREN (Cultural & Arts Center), he began to work with the children of war refugees, who - at the outbreak of the Balkan crisis - found shelter in numerous refugee camps in Slovenia. Amongst the orchestras that Etbin formed and led between 1993 and 2001 there were two outstanding ones: one made up of children living in Tolmin and the other made up of children living in Skofja Loka. The former, called Putujuci zemljotres (The Travelling Earthquake), which had its moment of glory performing at two Unicef concerts in 1993 and together with other members of the Exiles Project came second in the Eurovision competition of TV advertisements with a humanitarian message (1994). The refugee orchestra Masta Moze Svasta (Imagination Unlimited) from Tolmin (its members were mostly teenagers) performed many times, including the ‘Heard by the World Concert’ in July 1995 in the hall of the Council of Europe in Strasbourg.

Their younger brothers and sisters (aged 6 to 10) were trying to catch up by giving more modest performances playing in the orchestra, named by them - ‘Buduca Masta Moze Svasta’ (The Ensuing Imagination Unlimited).