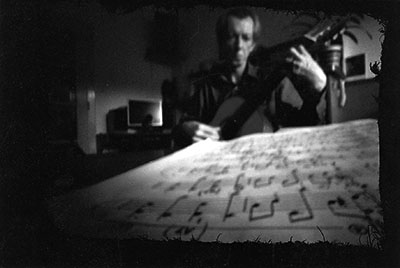 Etbin develops unique classical guitar playing techniques and combines them with well-known styles from different musical traditions. It is possible that some of the roots of Etbin's music could be geographically detected in terms of a slight ethnic influence that might only have developed in this particular small corner of the planet - the southern part of Central Europe between the northern Adriatic, the high ridges and peaks of the Alps and the endless plains stretching to the east.

Yet his `above us only skies` (what more could one expect) spirit led him far beyond these boundaries into globalisation in its most favourable sense. His approach towards music as a ritual brings up some fine minimal structures of hand-knitted string sounds, slightly away from `deus ex machina` perfection. Just as a tender pair of ears may give peace of mind, a soft breeze, or a penetrating sharp blow initiates an invocation to the shift of winds.

Etbin mostly performs his music at solo recitals but occasionally with guest musicians. Having spent over a decade developing various forms of creative artistic collaborations, he joined the group Sedmina in the early 1980s, subsequently doing live performances and recording music with them for a number of years. He also worked together with multimedia groups such as Om Produkcija, AVI – Audiovisual Engineering, Cavis and the Egon March Institute, which allowed him to combine his music and his art.

Lately he has dedicated himself almost exclusively to writing music for guitar and chamber music groups. In 2005 he founded the group Ante Portas, with which he did the first performance of the suite-like work Modus Vivendi. This was followed by another two suite-like scores written for the expanded chamber ensemble. The premiere performace of Sancta Simplicitas was recorded and released on audio CD in 2009 while Altera Pars is still waiting to be recorded although it has been presented live in Ljubljana's Club of Cankarjev dom in November 2011.


Etbin is a one man orchestra. Classical guitar - regarded as a small orchestra in itself - is often complimented with the dialogue between two mouth harmonicas and occasionally vocals. But the guitar remains Etbin’s fundamental instrument for composing music. The narration, often kept in its simplicity (like a mantra and its repetition), becomes the foundation on which the instrument, together with the ambient, weave a new tale. But the tale has always been there. The angelic choirs of harmonics could never be silenced by the simple laws of physics. They need no one, yet they love to dance with us after we recognize them. They support the courage of a vigilant mediator who begins the dialogue with himself – by all possible means.

Diatonic mouth harmonica, mounted on a rack, is one of the few musical instruments that can be played without using the hands. It has a lack of chromatic tones within a single key and this is why Etbin uses a chosen pair of mouth harmonicas and a special technique for starting the reed oscilation, which also completely changes the timbre of the sound. Such an ‘orchestra’ thus gains another solo melody or else the mouth harmonica enriches the harmony with its chords.

Etbin rarely uses vocals, but when he does, they mostly take the role of a third musical instrument. Sometimes we simply listen to the sound of words, yet their everlasting meaning is not lost, but it does not necessarily overpower other instruments.

This is the musician’s answer to the matter of abusing music through using it as the background for verbal messages.

Etbin started adding chamber musical instruments to his guitar compositions at the turn of the millennium, which brought with it a great assistant - the computer. However, the guitar remains his primary medium, the initiator and the Supreme Being of music composition. He has composed three major suite-like scores where the classical guitar appears in the company of more instruments in different combinations - from duos, trios, quartets, up to sextets for oboe, French horn, violin, cello, flute, ocarina, harmonica and various percussion instruments including tubular bells and xylophone.