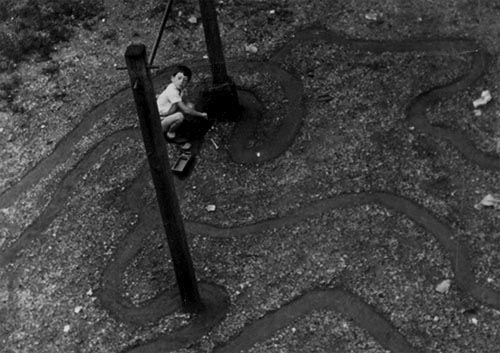 Etbin's visual communication is, since he was a student of the Ljubljana School of Design, permanently focused on the presentation of culture, arts, education, moral and ethical integrity in social action, coexistence with nature, in other words - free thinking, independency and liberation from behavior trends. His work is not subject to political agitation or any dogmatic apologetics and post-industrial marketing advertising triviality. Such a principled standpoint can be considered quite difficult and questionable, as the dividing line in the post-information society is becoming increasingly blurred by the pernicious manipulation of the unscrupulous global neoliberal economy.

Relatively modest self-promotion and low-budget narrowed space constraints affect only the quantity generated. Not only technical implementation but also substantive terms, are the circumstances which often give rise to an inventive approach, so that a certain imperfection brings a new quality as an upgraded acquisition.

The integrity of Etbin's creativity can also be found in other fields of cultural manifestation, from teaching to social work and last but not least in composing music for more than four decades. He mostly performes at classical guitar recitals on his own, sometimes with guest musicians and lately with chamber musicians. His musical work is recorded on various media.

Etbin also worked together with multimedia groups, which alowed him to combine his music and his art.

Etbin Stefancic Edi was born on 8th of December 1952 in Ljubljana. He entered the Graphics Department of the School of Design (now the School of Design and Photography) in Ljubljana (1967-1971). Thanks to the Union of Youth of Slovenia and the international organization for exchange students YFU (Youth For Understanding) Etbin was able to go on a one-year training in the U.S. (Theodore Roosevelt High School, Des Moines, Iowa). In 1972 he enrolled at the Ljubljana Academy of Teaching and taught art education at the elementary school in Skofja Loka. During his studies, he was art and technical editor for the journal Tribuna (1972-1974) and the literary magazine Problemi (1977-1982). In 1982 he became a member of the Designers Society of Slovenia (DOS).

From 1983 Etbin has worked as a freelance designer; from 1985 as a musical instrumentalist. His musical works, mostly for classical guitar played by himself, were first introduced to the public twelve years earlier (1973). Etbin is a member of the Slovenian Music Information Centre (SIGIC, 2005) and reconstitutive member of the Culture and Art Society KUD France Preseren in Ljubljana (1987). In addition to corporate letterheads and various art projects, he has designed labels and logos for its editions, posters, book covers and tickets for events.

Between 1975-1992 he co-created multimedia performances with Om Production, AVI - Audio-visual Engineering, Cavis, Most and the Egon March Institute.

As a designer of visual communications Etbin has been most attracted to the immediacy of symbols, compact communication through letters and the relationship between basic elements of expression. So he set about making trade-marks, logotypes, typography design, while the largest part of his oeuvre represents posters, book and record covers.

Etbin's graphical design was presented at two solo exhibitions: the Youth Cultural Centre in Koper (Posters, 1984) and in KUD France Preseren in Ljubljana at its tenth anniversary graphics review (The Images on Display, 1997).

Group exhibitions featured mostly graphic works but at the DOS exhibition R. Jakopič Gallery in Ljubljana (1988) Etbin introduced the composite object Light Degenerate. A musical self-promotional poster (co-author Andrej Trobentar) was in the selection at the group exhibition Slovenian (Non-commercial) Music Poster In the Nineties at KUD France Preseren gallery in Ljubljana (2003). A limited retrospective of posters and other publications (more than 14 works, mainly under the pseudonym Ediscroato) from the period 1976 to 1999 was shown in 2005 at the exhibition First Line (Prva linija) of the 26th Biennial of Graphic Arts Thrust (Sunek) in the International Centre of Graphic Arts (MGLC) in Ljubljana. At the photographs and posters digital exhibition New Rock '82 (1981-2000), the posters New Rock '81 and New Rock '82 designed by Etbin were projected on the big screen of Katedrala in Art Centre Siska in September 2011.

Etbin won praise for artistic creation in the 5th grade (1964), the Zlata Ptica Award in design (1974) and the May Award of KS Milan Majcen in Ljubljana (1976). During his stay in the U.S. three of his posters won awards: Only One Earth (Honorary Member Award Iowa, exhibited at the Art Center Des Moines, Iowa, USA, 1971), Fire Prevention (Plaque of City of Des Moines Fire Department, Iowa, USA, 1972) and Help the Handicapped (Veterans of Foreign Wars Prize, Iowa, USA, 1972). DOS has won praises for designing the cover of the journal Tribuna - poster Lenin (1974), Pankrti concert poster - Freedom '82 and LP cover Pankrti – Freedom '83 (1983), the inlay for the first Slovenian computer cassette for ZX Spectrum (1984) and the inlay of an audio cassette Cavis Negra (1986).

In the books Poster and Sign (Ljubljana, 1989) and Slovenian Posters of the Nineties (Ljubljana, 1997) by Stane Bernik, two concert posters Pankrti - On Her Majesty's Service (1983) and Etbin - Tristiae Et Hilariae (1996) were published. A large number of publications from the period 1976 to 1999, was published in the First Line (Prva linija) catalogue for Thrust (Sunek), the 26th Ljubljana Biennial of Graphic Arts (MGLC, Ljubljana 2005).